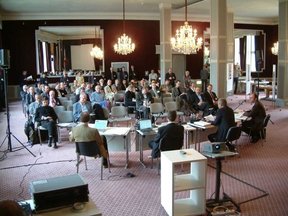 Press statement by President Peter Gruss on the occasion of the first Berlin Conference (PDF, german)

Harnack House in Berlin – location of the first Berlin Conference 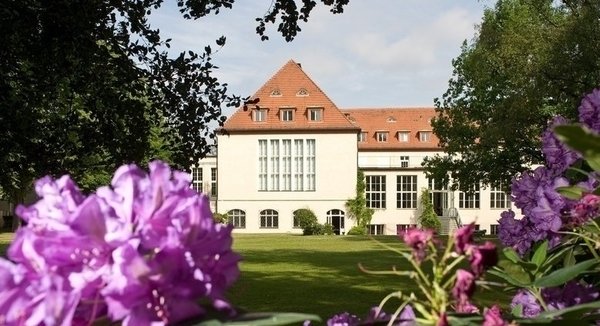 A congress organised by the Max Planck Society and the European Cultural Heritage Online (ECHO) project took place at Harnack House in Berlin’s Dahlem district in October 2003 with the aim of developing a new web-based research environment. From the announcment of the first conference:

Strategic Aims of the Conference

The 3−day conference aims to bring together key players from national and international research organizations, learned societies, museums, archives, libraries and research funding agencies and political institutions, commercial and non−for profit publishing services concerned about the future of scientific e−publishing and scholarly communication. The declared aim of the meeting is to provide guidance to all players involved on how to help build a future−proof, flexible, open, and high−quality scholarly and scientific publishing system. Prepare the transformation of all areas of research from the print into the electronic world.

The meeting was attended by more than 120 German and international experts and decision-makers from the following organisations:

The discussion focussed predominantly on ways of providing access to research findings, otherwise known as the Open Access paradigm. The most significant result of the congress that was later dubbed the Berlin Conference (Berlin 1) was the Berlin Declaration on Open Access to Knowledge in the Sciences and Humanities.

In February 2005, the University of Southampton, England, staged the Berlin 3 Conference, Progress in Implementing the Berlin Declaration on Open Access to Knowledge in the Sciences and Humanities. A Roadmap was formulated during this conference. The roadmap summarises the steps leading to the introduction of Open Access.

The Berlin 4 Conference, Open Access – From Promise to Practice, was held in March 2006 at the Max Planck Institute for Gravitational Physics in Potsdam. One of the focal topics of the conference was free access to raw scientific data in the interest of transparency in scientific research on the one hand, and as a means of promoting international and interdisciplinary cooperation on the other.

The Berlin 5 Conference, From Practice to Impact: Consequences of Knowledge Dissemination, was held at the University of Padua, Italy, in September 2007. Besides addressing many other topics, delegates were informed of the transition from the “green” to the “gold” road with the use of new financing models. The introduction of policies for free access to publications and research data was also discussed.

Heinrich Heine University in Düsseldorf invited delegates to the Berlin 6 Conference, Changing Scholarly Communication in the Knowledge Society in November 2008. The President of EuroHORCs (European Heads of Research Councils), Prof. Dieter Imboden, announced in his speech that he would be making Open Access a key issue during his presidency. Reports on a range of Open Access projects illustrated how changes could be achieved in scientific communication. The sound economic sense of the approaches presented at the conference was underlined by a study which found that the British economy would benefit from switching to Open Access.

Experts and others interested in Open Access met in Paris in December 2009 for the Berlin 7 Conference, Open Access – Reaching Diverse Communities, held at the Université Paris I Panthéon-Sorbonne. Besides presenting how Open Access is being specifically implemented in various areas of the sciences, the conference again focussed partly on the economic framework for the promotion of Open Access. Considerable time was deliberately set aside for discussions with representatives of the publishing business. The importance of the information infrastructure for successful research and the need for better visibility and usability of research data and publications were also considered.

In October 2010, the Berlin 8 Conference, Implementation Progress, Best Practices, and Future Challenges, was held outside of Europe for the first time. That year, the Chinese Academy of Sciences staged the conference in Beijing. The decision on the focus chosen for this conference served to emphasise the Chinese government’s research ambitions.

In 2011, the conference took place at the Howard Hughes Medical Institute, Washington D.C., USA on November 9 & 10, 2011. The conference, called Berlin 9 Open Access Conference: The impact of Open Access in research and scholarship, focused on the role that open online access can play in accelerating the conduct and communication of scholarship, and the opportunities this presents to the funders, creators, and end users of this information. Further details are available through the Web at www.berlin9.org.

On November 7 & 8, 2012 the Berlin 10 Open Access Conference was held by Stellenbosch University, South Africa, in partnership with the Max Planck Society and the Academy of Science for South Africa. Further information is given on the conference website at www.berlin10.org.

The conference on the tenth anniversary of the Berlin Declaration will be hosted by the Max Planck Society and will take place in Berlin on November 19 & 20, 2013. Further information will follow.