"Timing and conditions are ready for the transition" 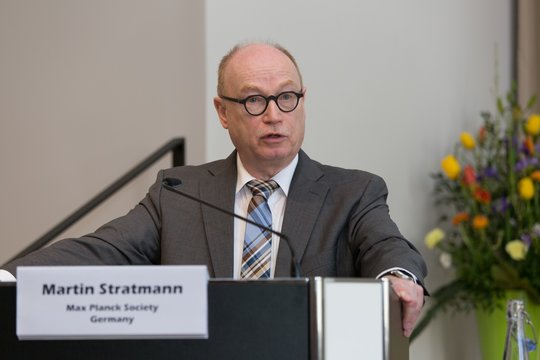 May I start by expressing my warmest welcome to all of you! I feel delighted to see so many of you here today in the Harnack-House, the “Club House” of the Max Planck Society. It has been our main conference venue and guest house since 1929 when the Max Planck Society was still called Kaiser-Wilhelm-Gesellschaft.

This place is where Einstein, Planck and Haber met regularly with international colleagues like Robert Andrews Millikan to discuss issues of scientific importance, to give lectures and also to indulge in some less scientific pleasures like good food, a good glass of wine, a long evening or a short tennis match. This is where big minds met to discuss the big but also the small and it is where science met politics, industry and the Berlin art scene.

Well, times have changed a little bit - the tennis court disappeared for example - but the scientific ambitions of our Club are still discussed here. Nowadays, we, the members of the Max Planck Society, regularly come together in our so-called “Scientific Council” and the meetings of the individual sections. In these meetings all science relevant decisions of our organization are discussed and prepared.

The Harnack-House is where we shape the future of our organization: We talk about which fields of science we want to enter, we talk about new concepts for new institutes and we deliberate on how to position ourselves in research politics. These regular meetings also serve to discuss topics of common interest, as we enjoy great independence and freedom even if we are financed by public funding.

And one of the topics we are highly interested in is the Open Access movement where we have been engaged for many years now.

More than ten years ago, in 2003, my predecessor Peter Gruss stood here in this room and said that the Max Planck Society felt obliged to give the vision of Open Access a chance. It was the day that we signed the so-called “Berlin Declaration on Open Access" which later became a milestone in the Open Access movement. Around 580 organizations from all over the world have signed it so far.

Back in 2003, Peter Gruss posed the question in his speech whether – and I quote his exact words here – whether “It is really necessary to answer every question before supporting the right idea?”

Well, certainly not! But in the process of attaining Open Access we have now arrived at a critical point where we have to find answers to questions – precise answers to real-life questions of research and research policy. What we need now is a kind of “engineering approach” to the matter.

If we want to reach our goals then we have to define a reliable route leading to these goals and then, of course, we have to take that route. In other words, there is no need to debate on the advantages of Open Access as we all are convinced of that idea, to the task at hand is to come up with a reasonable concept that will Open Access to become a reality.

Certainly, our concept must evolve into a fine –tuned, coordinated effort with national and international partners. Science is one of the most globalized endeavors of all. It has always been so. It is only when we join forces that we, the scholars, can realize a smooth, swift and scholarly oriented transition to Open Access. I'm firmly convinced of that and I ensure you that the Max Planck Society will continue to take an active part in every step of the process until we have achieved our goals.

Over the last 13 years our belief in the Open Access vision and our commitment to its realization has not changed. The Max Planck Society fully supports it. I would even go a step further and say that we try to push the process along as best as we can. As a result of the last Berlin Open Access conference in December 2015, the OA2020 Initiative was launched. It aims at converting the existing corpus of scholarly journals from subscription to Open Access.

One of the key ideas is to enable an orderly transformation of the current publishing system, since the pursued disruptions would affect only the underlying cash flows, rather than the publishing process itself or the roles of journals and publishers.

Today, the OA2020 Initiative has ten national contact points in seven different countries and we will hear country reports from Japan, Switzerland, Australia, and Germany this morning.  National contact points are a core element of the initiative. They are the central enabling mechanism that we need to synchronize activities internationally.

My hope is that we can quickly boost this number, especially as the international outreach of the initiative is already remarkable: More than 80 organizations have officially signed our “Expression of Interest”, the majority of them so far based in Europe and Asia. But the endorsement for OA2020 is growing in the United States, as well: In the last days we received signed Expressions of Interest from three campuses of the University of California, Berkeley, Davis and San Francisco, along with a number of others who made a special effort to submit their Expressions of Interest in time for this conference.

Of course, now there is a new set of questions at hand: What are the framework conditions necessary to achieve the goals of OA2020? What processes and policies must be adopted and implemented?  How can we leverage national contact points to share insights and coordinate efforts internationally?

Well, these questions are exactly what we are here for today and tomorrow. To prepare for the next major steps, this 13th Berlin Open Access conference aims at strengthening the international network of Open Access supporters and sharing the experiences of the various stakeholder groups so far. I’m sure that you will use this year’s Berlin conference as a platform for discussion, as an opportunity to review the OA2020 roadmap, and to build capacity for the transformation.

OA2020 is a design plan that calls for further refinement, we have to bend over it together, right here and right now at this meeting. We must exchange experiences that we have collected in our home countries since the outset of OA2020. What kinds of discussions, transformation mechanics and activities have been triggered? Is there a common bottom line that helps us in defining the next steps? This is something we want to find out here. 2020 is not tomorrow and not the day after tomorrow. However, it is not that far away either.  We must seize this opportunity!

Of late, we have received broad political support for our activities: A few months after the OA2020 Initiative was launched last year, Open Access reached the top of the political agenda in Europe. The EU Member State Ministers responsible for research have adopted conclusions on the transition towards an open science system.

The ministers unanimously recognized Open Access to scientific publications as the default option for publishing the results of publicly funded research and they support a transition to reach immediate Open Access as the default by 2020. And barely a week ago the European Commission declared its strong support of the OA2020 Initiative and our Berlin conference in a “Declaration of Support” that will be introduced and handed out to you tomorrow, on the second day of this conference.

Also, we have established business relations with publishers that are helping to pave the way to Open Access. More than 80% of all articles published by Max Planck affiliated authors are published with 20 publishers only, and a quarter of them are Open Access publishers already! But we want to go further. Let’s have a look at some concrete steps we have taken.  During the last year, the Max Planck Society was able to conclude some agreements which – at least in our perception – will contribute to the goals set out in the Expression of Interest. I will not go into the details now, as you will hear more about the key aspects of these agreements in the afternoon session.  But I want to emphasize that in our view these are examples how we can move forward with positive solutions for the many different stakeholders.

Furthermore, we have seen concrete progress on national levels, as well. After the success of countries like the Netherlands, the German DEAL project is now underway. The objective of the DEAL project, of which the Max Planck Society is a member,  is  to  conclude nationwide licensing  agreements  for  the  entire  range  of  electronic  journals  offered  by  the  major science  publishers.

At the same time, there are plans  to implement an open access component into these agreements, so that the costs of publishing open access will be  taken  into  consideration  within the scope of the licenses. Several hundred institutions, including universities, universities of applied sciences, research institutions, state and regional libraries, have expressed their support for this kind of license agreement.

DEAL was commissioned by the Alliance of Science Organizations in Germany – represented by the German Rectors’ Conference and the president of the Rectors’ Conference is leading the negotiations with the first big publisher, Elsevier. The first round of negotiations was unsuccessful, as has been shared and discussed publicly with quite some attention also outside of Germany. But in a few days from now, the negotiations will continue and we will insist on an agreement which facilitates a sustainable transition to Open Access.

However important it is, DEAL remains a “German DEAL” and as such it tells us a lot about where we stand with our intention to act as an international--as a global community of academics. There is still room for improvement!

A publishing house like Elsevier acts as one big player, it acts coherently as one unit across all borders. On the other side, the structures of our science systems vary greatly and this weakens our negotiating positions significantly, even on a national level.

Ladies and Gentlemen, we are currently experiencing the critical period of the Open Access movement. This is clear to me: I can say from my own experience and talks with politicians that the timing and conditions are ready for the transition, if we join forces across borders.

All stakeholders – universities, research institutions, funders, libraries – but also policy makers and publishers are moving towards a consensus and we, as scholars, are the ones who must ensure that this consensus is in the best interest of the advancement of science.