To strengthen the idea of Open Access within the community of young researchers we train early career researchers, who are sent as representatives from each Max Planck Institute to become Open Access Ambassadors. They will then carry the message of Open Access further.

The aims of the Open Access Ambassadors campaign are

Early career researchers and next generation leaders, coming from diverse disciplines and representing sixty different countries, gathered in Washington D.C. on 12-14 November 2016 for OpenCon, an international conference dedicated to Open Access, Open Data and Open Education. The main topics discussed at this year’s conference included several approaches to improve the scholarly publishing system, the evaluation of scientific productivity, and even further equality in scholarship. The leitmotiv of the three day conference revolved around worldwide democratization of knowledge through Open Access, Open Data and Open Research. Participating in OpenCon 2016 opened up a repertoire of opportunities for four of the Max Planck Open Access Ambassadors (OAA): to be exposed to new and interesting insights on the evaluation of research, the meaningful impact of research and changes in the culture of scholarly communication, such as preprint articles and public outreach activities. Attending OpenCon 2016 not only provided OAAs with such new insights, but also connected this small group of motivated early career researchers to a large network of active and energetic people, from scientists to librarians and politicians. 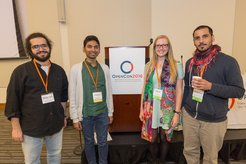 OAA Amie Fairs from MPI for Psycholinguistics, Nijmegen intends to make the entire research process open. In other words, openness is not only limited to published research articles but also sharing data, scripts, analysis, methods and materials. She says “Opening up the entire research process will eventually benefit everyone in the research community.” Her plans include advocating to peers about the usefulness of publishing Open not only for the progression of careers but also for the progression of access to knowledge.

“OpenCon is really different from a scientific conference in the best possible sense. The opportunity of discussing revolutionary issues in the cycle of scholarship with people from very diverse backgrounds and open mind makes OpenCon an inspiring events I have ever attended.” says OAA Mauricio Nicolás Adreani from MPI for Ornithology, Seewiesen. He is strongly committed to take action in removing barriers through open access. Working to bridge language and geographical barriers in research is another way to open up science .

OAA Shervin Safavi from MPI for Biological Cybernetics, Tübingen is interested in establishing the idea that data sharing by scientists be incentivized. According to him, “Data sharing will save time, efforts and funds in re-inventing the wheel.”  His enthusiasm in initiating discussion on the barriers of open data sharing culminated in a successful unconference session of the program.

OAA Vinodh Ilangovan from MPI for Biophysical Chemistry, Göttingen is also a member of the OpenCon 2016 organizing committee. He emphasized the role of early career researchers in steering the evolution of unbiased research evaluation. He says “Due to the efforts of the Max Planck Digital Library, publishing through the Gold Open Access route has been made easier. However, if the Max Planck Society supports an Open Research Platform it will benefit researchers to share interim products of their research such as working protocols, data codes, and preliminary data sets, as well as the final research output as a preprint or research article.”

Advocacy training, an integral part of OpenCon helped the OAAs to sharpen their skills on effective communication with policy makers. Galvanized by the experience from OpenCon the OAAs hope to team up and advocate for a two-fold (top-down and peer to peer bottom-up approach) Open Science Policy within the Max Planck Society. The Max Planck Society is a co-founder of the international Open Access movement and a lead sponsor of OpenCon as well.