Towards a new DEAL

Memorandum of Understanding signed by Projekt DEAL and Springer Nature. The German subscription spendings for Springer journals will be systematically rededicated from 2020 onwards in order to make publications from German scientific institutions freely available at Springer Nature.

The MoU provides the basis for a transformation agreement that will include an Open Access Gold component and a Publish and Read element. Scientists and scholars at the participating institutions will thus be able to publish around 13,000 articles annually in the more than 600 Open Access journals and 1,900 Springer Nature open access subscription journals. These articles will be freely available worldwide as soon as they are published and will increase the visibility and global use of the German research results published by Springer Nature. In addition, the model offers the academic community extensive read access to the scientific journals of Springer, Palgrave, Adis and Macmillan at the approximately 700 eligible German scientific institutions. The final agreement is expected to be concluded and published later this year.

A Memorandum of Understanding (MoU) signed today between MPDL Services, on behalf of Projekt DEAL, and Springer Nature sets the scene for the world’s most comprehensive open access (OA) agreement to be finalised later this year. 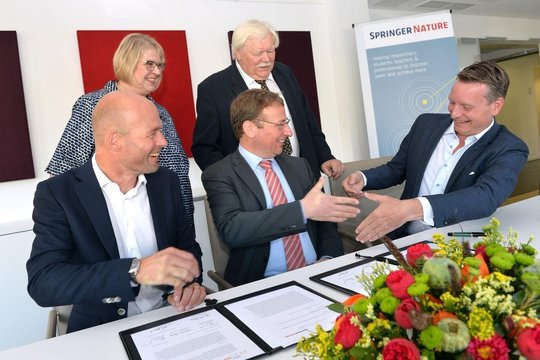 Reaching such an understanding has been possible through acknowledgement of the common commitment of both parties to the principle of open science: Projekt DEAL’s vision and enablement of open access to German research on a large-scale and Springer Nature’s position as the largest OA publisher and their expertise as a pioneer of transformative deals. The agreement is expected to see well over 13,000 articles a year from German researchers published OA, meaning they will be freely and universally available for the world’s students, scholars and scientists to read, share, use and reuse from the moment of publication.

The transformative two-part agreement will encompass a fully OA element and a Publish and Read (PAR) element. This will enable eligible authors to publish OA in both Springer Nature’s fully OA journals, the largest OA portfolio in the world with over 600 titles, and Springer Nature’s collection of 1,900 hybrid journals, which collectively already publish one in four of all OA articles. In addition, the model provides the academic community of the participating institutions with permanent reading access to content in Springer, Palgrave, Adis, and Macmillan academic journals published during the term of the contract.

Key elements of the MoU

Commenting, Daniel Ropers, Chief Executive Officer of Springer Nature said: “It is a real privilege to be working with Projekt DEAL to transform research publishing in Germany. This arrangement has taken 3 years to finalise which reflects its scale and complexity, but we highly appreciate the leadership the German research institutions have shown, and in partnership we’ve been able to conclude this journey with a ground-breaking solution. The shared belief, commitment and openness of both parties has facilitated an understanding which is sustainable for both partners: for German research, as it enables scientists in Germany, whether from small or large institutes, whether from the physical, natural, applied or social sciences, and whether grant funding has been available or not, to publish OA with us. And for Springer Nature, as it facilitates faster growth, allowing us to benefit from our leading role in the open access migration as a partner to the research community.”

Prof. Dr. Horst Hippler, former President of the German Rectors' Conference, speaker of the Steering Committee and head of Projekt DEAL commented: “We are very pleased to have come to an agreement that meets both core goals of Projekt DEAL: a fair pricing model and a shift towards open access. The long publishing history of Springer Nature is highly respected in the German research community and through this agreement the publisher has shown to be an innovative and open partner ready to deliver the solutions that are best for science and the scholarly endeavour. The emerging contract will thus significantly contribute to making research accessible in an affordable and sustainable manner. I would like to thank the many people involved in the negotiation process and the hundreds of institutions in our scientific community – universities, libraries, research institutions – who endowed Projekt DEAL with their trust and mandate for the negotiations on their behalf. I also thank the Max Planck Society for their support – not exclusively but especially – in the operational and legal aspects on the road to making the contract a reality. “

The Max Planck Society, as a member of the Alliance of Science Organisations behind Projekt DEAL, instituted MPDL Services GmbH, an affiliate of the Max Planck Digital Library, as a 100% subsidiary of the Society specifically as the contracting party for the DEAL contracts and to facilitate implementation of the agreements among German institutions.

Prof. Dr. Martin Stratmann, President of the Max Planck Society said: “Given the entity of German research published in Springer Nature journals, this agreement will mark a significant milestone in the move to liberate scholarship from the subscription paywalls that have been hampering the work of scholars and scientists in our digital age for far too long. A cost-neutral transformative agreement with such a significant publisher as Springer Nature establishes a new benchmark for academic and research organisations aligned in the Open Access 2020 Initiative, demonstrating that institutional funds currently used to support the paywall subscription system can be repurposed to inject more openness in the scholarly journals which provide the natural habitat of researchers, on the road to a fully open information environment.”

Frank Vrancken Peeters, Springer Nature’s Chief Commercial Officer said: “Springer Nature has been pioneering transformative agreements since 2014.  Since this time we have monitored their impact on open access research and we now know that OA articles are cited more often, downloaded more often, and have greater and broader impact. This is why we believe they have earned the title ‘transformative’ and why we are confident that this arrangement will deliver greater visibility to and increased usage of German-funded research, as well as, given its size, significantly advancing the global goal of Open Science.”